10 tips for writing effective headlines for the web

HomeSEO10 tips for writing effective headlines for the web 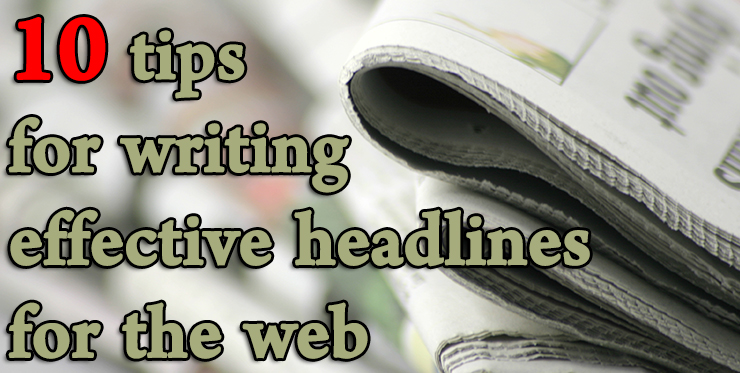 The importance of headlines should never be overlooked, a little time spent finding the right headline can make a lot of difference.

A good headline means more people will click on your article wherever they see it, it ensures that the effort you spent in writing an article doesn’t go to waste, and it can also help your content to be picked up by search engines in the weeks and months after publishing.

Here are a few areas to think about when writing headlines. It should be noted though, that its not about writing sensation headlines for short-term traffic gains, it’s about ensuring that, if you write a quality article, the headline works to sell it.

1. Headlines should be descriptive

As I mentioned in a recent post on journalism and SEO, some lamented the passing of the pun headline with the coming of the web.

They were fun, and there’s nothing to stop them being used in print, but web headlines do need to be descriptive. Who knows, maybe you can manage both in one headline.

The problem is that non-descriptive headlines don’t work so well out of context. The headline has a big effect on rankings too, so they don’t work for SEO.

It short, it needs to tell people what they can expect from the article.

Definitions of clickbait will vary, but I think many people will agree on what crappy clickbait is.

There’s this kind of garbage which appears on many news sites these days. There’s worse out there, but this is from a Washington Post article on Syria, very relevant…

Clickbait can also refer to headlines that don’t deliver on their promises. Too much hyperbole, tips on SEO that promise to revolutionise your marketing strategy, and so on.

Yes, headlines need to be enticing, but there’s a balance to strike. Don’t overdo it. Headlines which promise the world and bring in traffic only to disappoint will not work as a long-term strategy.

3. Headlines have to work on their own

When we write articles, it’s easy to think of them placed on top of the article and forgot that they’re often seen out of this context.

They’re often competing for attention with other articles, and your potential readers will scan and decide whether to click in a relatively short space of time.

The web, in various ways, limits the length of your headlines:

All in all, my advice would be to keep headlines under 60 characters where possible, especially if you’re looking to create evergreen content which works well in search results.

Which is why the following headline is 103 characters long 😉

5. Don’t promise what you can’t deliver

This ties in with the clickbait point to an extent, but you can write a good headline and not deliver on the content.

Now, some of this comes down to quality. If you offer what you bill as ‘killer tips’ and they’re just collated from a bunch of posts around the web, without much original thought or detail, people will feel like they’ve been had.

There’s a tendency towards adjectives in headline writing that can sometimes oversell content -‘amazing tips which will supercharge your content marketing’ etc.

If you’re going to go bold, you’d best be confident that your content matches the title. I’ve gone for‘the ultimate guide’ on a recent ClickZ post. Think I’ve gotten away with it so far…

As we know from point four, there are a number of reasons to keep headlines relatively short.

Take time and look at your headlines. Is every word essential? If not, remove it.

7. See what works and learn from it

Take a look at your analytics, and look at the articles that are being shared more on social media. Can you spot a few common features?

For example, these are the five most shared SEW articles from the past six months, as shown by Buzzsumo.

I’d say in all cases the title tells the user what to expect if they click on it. They’re all relatively short too, and of course, we have a couple of lists in there.

It’s good to look at a mixture of tools to get the right idea. What works on social isn’t necessarily the same as what works in terms of traffic, or in terms of leads or conversions.

However, some common factors should emerge that will help you create better headlines.

The rule was always to front-load keywords, but this is supposed to be less important to Google now. I’d still want to get my keywords in the title though.

It will help with ranking, it’s more likely to be used as anchor text if people link back to your site, and these keywords can also catch the attention of your target audience on social sites, in newsletters or in search results.

9. Don’t be afraid of lists

It’s easy to mock the listicle, but the plain fact is that they work well online.

People like lists, it tells them that the article has a defined structure and should therefore be easy to read and digest.

These are the top ten pages from the past year on SEW. Five are number, six are lists. If I stripped out the homepage and category pages, there’d be more.

How to’ also works well for us – four of the top 20 fit this pattern. Then there’s asking and answering a question – these work on people’s natural curiosity and, if written well, are useful to the reader.

Sometimes I’ll come up with headlines alone, but I find it helps a lot to discuss with colleagues and bounce ideas around.

You may think you have a good headline already, but maybe someone else has a better idea.

While you’ll find plenty of headline generators and formulas around, headline writing shouldn’t be too automated.

There are key factors to consider, rules which are worth following (most of the time), and some things to definitely avoid, but headlines also have to reflect the personality of the site and its audience.

Also, you’ve got to mix it up. If every headline is a numbered list, won’t look good even if it works for traffic (unless you’re Buzzfeed).

3 essential stories you need on your website to attract customers

Digital Marketing strategy ROI for entrepreneurs: It’s a marathon, not a sprint