3 ways to use the power of persuasion in
your marketing 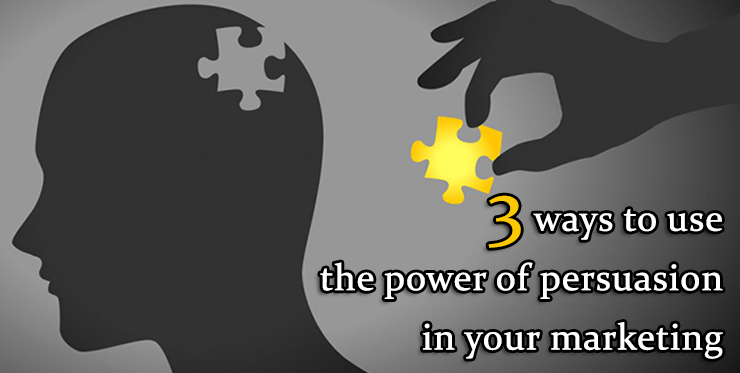 To fully understand what persuasion is, it helps to begin with what it is not.

Derek Rucker is a professor of marketing at Northwestern’s Kellogg School of Management whose research focuses on persuasion and consumer behavior. He is also the father of an 8-year-old girl with an iPad. Because he limits her screen time to an hour a day, he frequently tells her to turn off the device and put it away. She usually listens. But is that persuasion?

Not really. “She still believes she should be able to use the iPad as much as she wants,” Rucker says. Yes, he has influenced her actions — but it stemmed from his parental authority, not his ability to change her beliefs.

Persuasion, meanwhile, requires the ability to alter not just action but attitude. The difference is subtle, but important: A cereal brand that slashes its prices may gain new customers, but it hasn’t fundamentally changed how it is perceived.

It’s a distinction that gets at why persuasion can be so tricky, often requiring time, skill and a nuanced reading of multiple moving parts. But for brands looking to make, improve or reconfigure their image with consumers, there are few tools more valuable.

Here are three things to consider when attempting to craft a persuasive message:

In the early to mid 2000s, male grooming product company Old Spice’s marketing strategy revolved around projecting sex appeal — wear Old Spice, get the girl. The problem, Rucker says, was that Axe also already relied on that same message. That brand had a firm grasp on the “sexy” corner of the market.

Old Spice was losing ground, so the company tried another approach in 2010. Instead of projecting sex appeal, its new ad campaigns projected an overtly humorous take on masculinity and confidence, speaking to men and women consumers alike. Take the below ad, part of Old Spice’s “Smell Like a Man, Man” campaign, in which the chiseled actor Isaiah Mustafa delivers the following line, straight-faced and shirtless, on a beach: “Anything is possible when your man smells like Old Spice and not a lady.” It became a viral hit. By shifting strategies, Old Spice emerged from under Axe’s shadow.

Certain messages can be a harder sell simply because a competitor is already selling them convincingly. “Part of your job is reading the board,” Rucker says. For him, the most enjoyable aspect of constructing a marketing strategy is taking additional players’ tactics into consideration.

Persuading consumers isn’t structured like a debate. It’s rarely that clean. Instead, it’s a competition to gain attention, good will and dollars in a sea of competing voices.

Old Spice wasn’t successful at persuading consumers to buy its products by convincing them it had more sex appeal than Axe. So it recalibrated and changed strategies.

“[Old Spice] tried to get there from one route, couldn’t do it, and then tried a different way,” Rucker says. “That’s the fun thing about persuasion — there’s rarely a single message that’s the one right message.”

A message’s persuasiveness also depends on who is listening and how they are doing so.

People exist on a spectrum, Rucker says. Some scrutinize every message, others make snap judgments based on peripheral cues and most fall somewhere in between. Fact-based messages from experts tend to resonate with the former group, while messages from charismatic sources are a good bet for persuading the latter.

Context also matters, of course. The more engaged a person is with the topic and content of a message, the more likely he or she is to look past surface charisma to evaluate its objective strength. This makes intuitive sense, Rucker says, because an audience’s level of interest in a message tends to be positively correlated with the amount of attention they pay it.

The situation matters, too. Distractions, fatigue and a lack of time are compounding factors that can slide an audience’s receptiveness away from quality towards quantity.

For a brand, this means identifying its audience’s general position on the continuum and crafting persuasive strategies accordingly. If the audience is engaged, “stick to arguments that are strong.” If they are distracted or disinterested, “you should definitely throw in everything.”

Apple is a very sophisticated persuader, Rucker says, because its strategy employs both substance and charisma to appeal to consumers on multiple levels. Take the rollout of the Apple Watch — the campaign began with ads that emphasized the wearable’s functionality, and then moved into a series of ads that focused on the device’s attractive design and lifestyle appeal.

“It was a very clever move strategically,” Rucker says. “Remember: competition matters.” The  two-pronged approach meant that smartwatch manufacturers such as Pebble, Samsung and Google “had to beat Apple not only on the functionality, but on image association as well.”

Historically, Apple has been masterful in generating consumer confidence around the superiority of its products. While likeability is an asset, a brand’s ability to inspire conviction is an invaluable competitive advantage. It’s far easier to convince consumers to try a new product than it is to convince them to abandon a product they believe in, Rucker says.

“As people become more confident, it becomes increasingly difficult to change their beliefs,” he says. They will dismiss conflicting information and approach challenges with suspicion, which means competing brands must first erode consumer confidence before they can successfully sell their own message.

7 marketing mistakes that could sink your business