Some of us might possibly be aware of native ads or we might not even know if we encountered one on a website that we had visited. To get a clear picture of what native ads are and how it can help in boosting the revenue of the publishers, Let’s dive into this article.

Native ads are a new advertising strategy in the market where advertisers will try to get the attention of the reader by making the paid ad look like a normal article without even being noticed and obstructive to viewers. It adapts to its surrounding environment in order to get their attention of the readers and get them interested enough to share the ads, instead of tricking them.

There are two native advertising styles, which are generally used. First is the Closed Native Advertising System which allows brands to build customized content that only exists on the website’s platform and nowhere else. The perfect example for this native advertising system is platforms like Facebook and Twitter where brands have to work their profiles and also their content within the platform.

As per an estimate by Business Insider based on the data provided by PwC, Native ads will account 74% of the total display ad revenue in the United States by 2021. 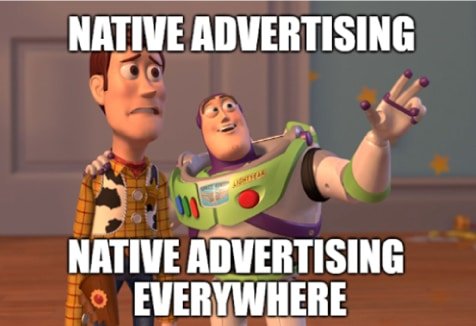 What is Native Advertising?

While browsing publication websites or social media platforms, you might have come across posts with titles like Promoted Stories, Sponsored Posts, or Recommended for You. When you click on these posts, you’re redirected to a third-party website. This is an example of native advertising.

Native advertising camouflages into the media format on the platform it is placed on and permits brands to deliver content in a non-sales way. So, unlike banner ads, native ads look like part of the interface and do not interrupt the UX.

Although one could argue about the misleading nature of native advertisements, the Federal Trade Commission (FTC) has implemented the necessary guidelines to prevent businesses from employing shoddy advertising tricks and strategies.

Similar to other types of advertising, native ads also have various formats, each with its own set of benefits. The Interactive Advertising Bureau (IAB) has recognized the following 6 types of native advertising.

1. In-Feed Units
While all native advertising on social media is considered “in-feed ads”, not all in-feed native advertising happens on social media platforms. Something called Real-Time Bidding (RTB) enables digital marketers to utilize various targeting techniques to serve up relevant ads to individuals across a list of pre-approved websites. While the ad has the look and feel of “just another article”, it is distinguished from organic content by an advertising label. Once a user clicks on that particular ad, they are taken to the sponsored brand’s blog or landing page, Forbes, Mashable are perfect examples of such ads.

Programmatic in-feed ads are one of the only methods to scale ads across the vast reach of the present web, and their non-disruptive nature yields click-through rates up to 10 times higher than that of banner ads.

In-feed units appear different from site to site as they fit into each unique user experience of a site. For example, LinkedIn’s in-feed ad units. 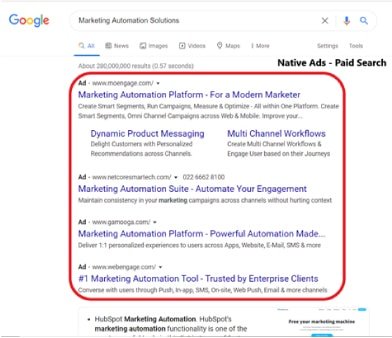 3. Recommendation Widgets
Another spot where you’ll find native ads on social media, publisher sites, and even search engine results pages, is in recommendation widgets. You’ll often see these advertisements off to the side of a web page, or even at the end of an article, to recommend additional content you might like to see.

4. Promoted Listings
If you have an online shopping habit like many of us, you see promoted listings regularly. To give you an example, while searching for new marketing books, several sponsored listings appear on Amazon.com. However, while those publishers paid for those media placements, they’re made to look just like the organic listings.

5. Display Ads With Native Elements
This type of native advertising looks simply like any other advertisement you might see online. You may even see them in an advertisement container or banner. What makes them native, however, is that they’re logically relevant to the site they appear on and the content they appear next to.

For example, Campbell placed an in-advertisement unit on allrecipes.com for their recipe collection. While the ad does not look like the actual recipes listed on the site, it is contextually relevant to the page.

6. Custom
Given the speed of technological change and the potential for publisher partnerships, the last type of native advertising as defined by IAB leaves the door open for a range of possibilities. Building a new Snapchat filter is an example of a custom native ad. The filter, while a form of paid media, fits within the user interface of an app alongside Snapchat’s other filters.

Why Publishers Should Adopt Native Advertising? 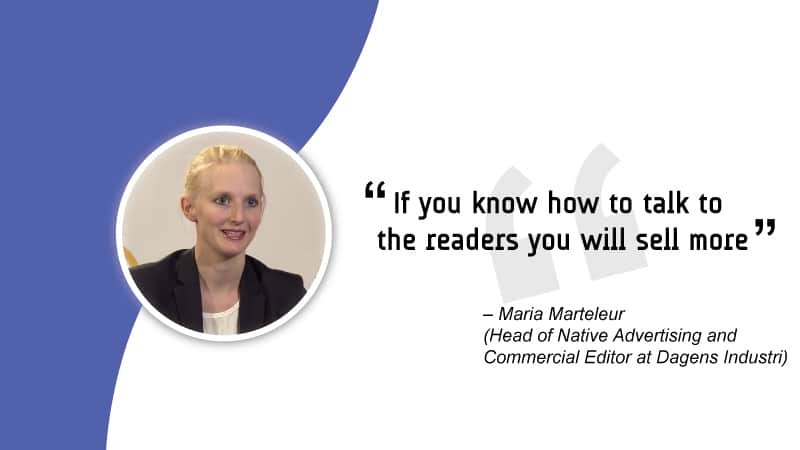 Traditional display advertising is losing its effectiveness as clients get immune to them. advertising fatigue and Banner blindness are real, and advertisers have a challenge tackling them.

More than Just an Ad Space
Native advertising offers an incremental stream to publishers well beyond the initial value of the digital inventory they offer to advertisers. In fact, many publishers can design and sell the creative concept and content creation of native advertising themselves from their team of commercial writers and as a result, work directly with advertisers for a premium. It’s what their communities and advertising partners need.

A great number of digital publishers have already taken on a more content marketing-led approach. For example, Guardian Labs is a commercial content team at The Guardian which is completely dedicated to these types of branded partnerships. This allows it to offer native partnerships to some customers while working with agencies on most of the larger campaigns.

Enhance Publishers Traffic
Once incorporated with a native advertising technology platform, media owners can target audiences through other publishers and scale their own native ad campaigns via audience extension, driving potential users back to their own websites.

Programmatic Native Advertising will boost CPM’s
The presence of programmatic native advertising signals continued growth in the market and includes a layer of control for publishers looking to monetise premium programmatic inventory. Working with native players, many have also started to develop private programmatic marketplaces, where they can sell their own inventory natively to the most significant advertisers, offering ‘ring-fenced’ spaces targeted for specific keywords or valuable audiences.

These private marketplaces offer direct relationships with advertisers and agencies, just like the old days, permitting media owners to command higher prices for higher-quality inventory. They additionally offer transparency and scale, which are invaluable for everyone involved.

By Adopting native advertising, publishers can control and manage every aspect of their inventory with zero-time, zero work & immediate revenue.

Just like there is an exceptional increase in the competition between advertisers for the advertising inventories of the publisher, the publishers are also attempting to deceive each other in providing value to their readers. More prominent the usefulness, better the flow of traffic and higher the demand among the advertisers.

Header bidding is one of the numerous and most effective techniques applied by publishers to enhance ad revenues. However, it may sound like a familiar term but you’re not quite sure what it means, so here is a small description;

The publishers set up their inventory of reserved or unreserved advertisement for bidding or auction outside their advertisement servers to more than one advertiser at the same time, this increases competition between the advertisers prompting to higher revenue for the publisher.

Major international publishers like Mail Online, CNN International, or Trinity Mirror accepted that they experienced a major boost in their programmatic revenues after they moved to header bidding.

Six major publishers, particularly, Google, Facebook, Microsoft, IAC, AOL, and Yahoo consume 30% of the total ad revenues. However, publishers can effectively boost their appeal to the brands with the help of audience extension methods.

It is a technology utilized by publishers to earn a regular income from the traffic to their sites. Audience extension empowers publishers in the following manner;

Publishers looking to increase the click-through rate of the advertisements featuring on their sites should consider the ad placements carefully. The location of the advertisement units makes a huge difference. Some of the most common practices put the ads in the following locations;

All advertisement networks are not paying masters. Some are good with the pay while others are certainly not. Hence, it is always a smart thought to compare the ad networks before permitting them to begin placing the ads on your website.

However, payment isn’t the only reason why you should be comparing the networks. Relevance and quality of the advertisements are also necessary considerations. It doesn’t matter if you have utilized the perfect size and select the most appropriate location for an ad, if it is not relevant it will not yield any result. Additionally, the CTR will suffer if the advertisement hasn’t been reasonably designed, like if it has no clear call-to-action.

Stay Up with Trends

Earning revenues from ads is a continuous process and your responsibility as the publisher is to constantly audit the site for any loophole. The main idea is to stay aware of the trend, which is constantly changing. Keep monitoring the behaviour of your visitors and you can utilize tools such as clickmaps, heatmaps, scrollmaps, etc to monitor the audience interaction with the website.

Native advertising is one of the key methods which not only allows the publishers to earn income but also offer value to the advertisers. These are typically paid content that mixes so well with the content on the site that it looks a part of the website itself. Below we have mentioned some of the features of native advertising; 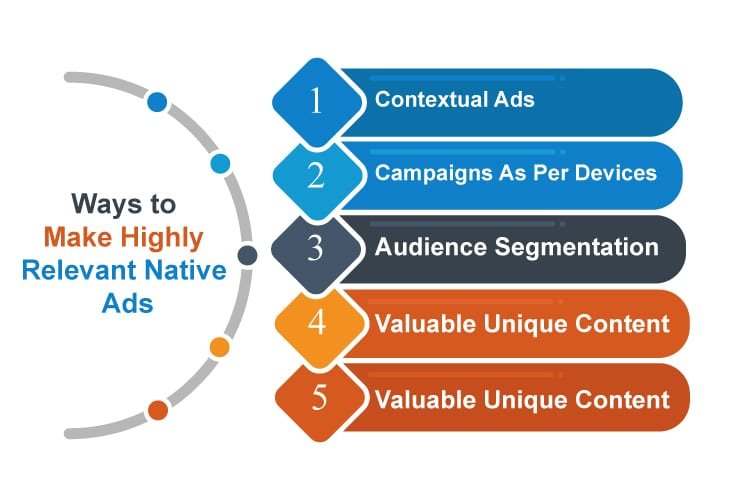 Native advertising is showing no signs of slowing down and continues to experience exponential growth in all regions and over all devices. Regardless of whether your goal is to promote your brand, drive app installation or get new customers to your site, native advertising offers a variety of creative and powerful methods to achieve your marketing goals.

Fundamentally, Native Ads are a huge opportunity. Publishers with access to native networks and software-as-a-service (SaaS) platforms can build, run and scale native ad campaigns themselves, developing closer relationships with their brand and agency partners. It offers a level of data analysis that makes sure that everyone knows precisely what they’re getting. In particular, they can increase their revenue streams at a time when the publishing industry as a whole is under a decent of pressure.

5 useful tips for planning your finances as a digital nomad

How to monetize a popular blog