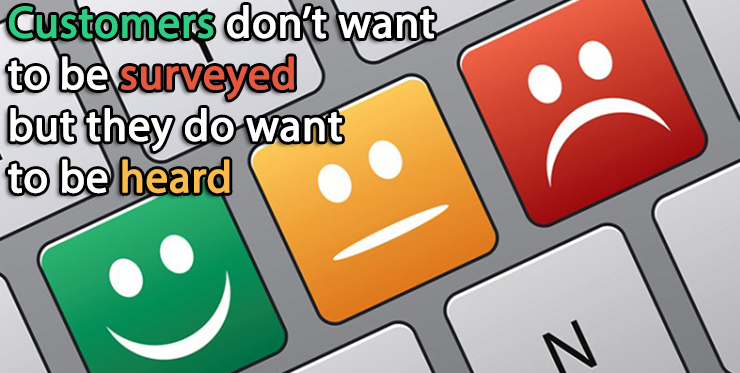 Customers want to be understood, businesses want to understand them and yet satisfaction surveys have become anything but satisfying.

That’s because the practice of polling customers for their views has seen no appreciable change in over two decades, yet the world we live in has shifted drastically.

In spite of the possibilities afforded by the digital age, businesses continue to churn out old fashioned surveys and forms filled with checkboxes and uninspired questions.

While technology has made online surveys faster and easier to distribute, the majority of companies have failed to take advantage of the boundless opportunities afforded by digital marketing.

Instead, online surveys look and feel the same as their paper predecessors. And, as these standard surveys increase in volume, they begin to look suspiciously like spam.

Thus it should come as no surprise that survey response rates have dropped over the last twenty years — from 20% to 2% in 2014.

However, some businesses are actually reporting steady response rates. These companies are reviving surveys with fresh thinking and new approaches that take technology and customer experience into account.

Here’s what progressive pollsters are doing to make surveys work in the digital era:

In his book The Attention Economy, Thomas H Davenport describes how human attention has become an increasingly scarce commodity in a world of abundant content.

Although there is conflicting research on the impact of questionnaire length and completion rates, long surveys inevitably increase the likelihood that the survey taker will not make it to the end.

They also result in poorly considered responses that I like to call the meh effect; or, more academically, satisficing.

The trend for progressive pollsters is shorter surveys. Their ambition is to ask scarcely two questions — Would you recommend? And why? Not everyone achieves this level of minimalism, but it can act as the starting off point for crafting concise, to-the-point questionnaires.

Similarly, marketers typically prefer a 7-point scale — the additional gradations make it more useful to us even if it requires more effort from our customers. But an outside in survey will opt for a 5-point scale or even a simple thumbs up / thumbs down rating.

We can convince ourselves that more points equals more data but it is not the case. And, as one senior survey consultant pointed out to me, five questions on a ten-point scale is a full fifty dots. It just looks exhausting.

Go beyond the traditional survey

The progressive pollster also recognizes that there’s a wealth of customer feedback to be found in organically occurring conversations.

Thanks to the digital, social and mobile age we have real and practical access to the unsolicited, authentic and unfiltered voice of the customer. All you have to do is listen.

Feedback on social is especially telling as it collects insights in real time, often providing a more complete look at the customer journey.

For example, a customer might tweet about the similarity between their dinner destination and the Sahara if they are kept waiting for that first drink order too long. But by the end of the evening their experience might be very positive overall. Each of those insights is useful, but together they give a more complete picture in context.

Perhaps most importantly, the truly progressive pollster thinks beyond analyzing data. They start with an intent to make real and practical changes in the business rather than fine tune the marketing budget.

When customers make the effort to share their views, they want to be heard. So we should sit down, put away the forms, the scales and preconceived notions about what our customers will say and, instead, sit back and listen.

Social media marketing on a budget