How paid search marketers can prepare
for the 2015 holidays

HomeSEOHow paid search marketers can prepare for the 2015 holidays 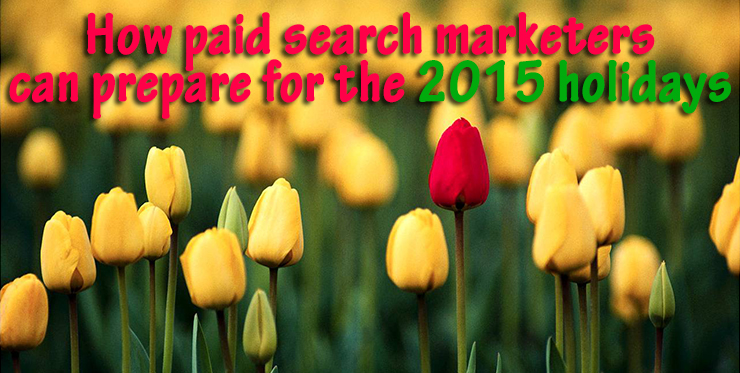 For paid search marketers the holiday season is already in full swing and competition is going to be tough.

Paid search advertising spend for Black Friday began to surge the week of September 27, two full months earlier than the actual Black Friday this year. For comparison, in 2014 the jump in spend on Black Friday keywords didn’t occur until the week of October 26.

Significantly, the companies leading the charge this year include major brands that are consistently among the largest advertisers in paid search, including Amazon, Target and Walmart.

The following strategies will hopefully help your paid search holiday campaigns succeed against those bigger competitors.

You may be late in the game on this one but reserving enough budget for Q4 is critical.

As a guideline, retail advertisers spent 34% of their paid search budget in Q4 last year, which is consistent with prior years as well.

For the top advertisers in the retail category, they spend up to 45% of their annual paid search budget in the fourth quarter. And for some seasonal advertisers, that number can shoot up to 85%.

The primary reason you will spend more in the fourth quarter, of course, is that more consumers will be shopping since it’s the holidays. However, you should know that your cost per click may rise in Q4 as well.

On average, it was found that retailers experienced a 7.9% increase in their cost per click in the fourth quarter of 2014, compared to the prior three quarters of the year.

If you’re on top of your paid search campaigns, then you probably have a good idea who your top competitors are on your most important keywords. However, the marketplace can shift dramatically during the holiday season.

Many advertisers, particularly smaller niche players, hold back budget throughout the year to blitz the market during the holidays. Aggressive new advertisers such as these can bump you from your position and siphon traffic during crucial shopping periods as well as drive up your cost per click.

Safeguard against interlopers by optimizing your campaigns now, including clickthrough rates, ad copy and landing pages, to ensure a strong quality score relative to the competition.

Although there are multiple levers you can pull to try to boost your clickthrough rate and ultimately your quality score, the most effective method is ad copy optimization.

Done right, copy optimization is accomplished through split testing, i.e. running multiple ads with varying elements to determine which one is the best performer. Elements to test include ad title, line 1 and line 2 copy, call-to-action and promotions.

The problem, however, is that it can take a lot of time and effort to produce positive results. Time which you likely don’t have during the holidays.

Fortunately, there are ways to expedite the copy optimization process. One of the most effective is to mine your competitors’ ad copy to generate new ideas to test in your own campaigns, including the copy language, the offer, special promotions and ad extensions.

As a best practice, for high volume keywords getting at least 25 clicks per day, test at least five versions of the same copy element, including one verbatim version and four rewritten variations. For keywords getting fewer than 25 clicks a day, scale your testing down to just two versions to avoid losing valuable time waiting for statistically significant results.

Employing this practice can save you considerable time and effort since it essentially enables you to benefit from all of your competitors’ previous hard work.

The practice becomes more effective when utilizing a competitive intelligence tool to specifically look at your competitors’ most successful ads in terms of their ad coverage (the frequency the ad is shown) and its average position on the search results page.

It’s also helpful to use a competitive intelligence tool to look at what your competitors were saying in their most successful holiday ads from last year, since they will likely have very different messaging at the end of November than they do in September or October when you begin optimizing your own copy.

As I’ve written about previously, after analyzing 20m paid search ads appearing in the US we found that the most successful had the following 10 attributes in common, including not using numbers, exclamation points and the actual price.

Try testing these in your campaigns now to prepare for peak holiday shopping periods in November and early December.

Furthermore, don’t forget about employing search refinements in your copy strategy, which cater to the common consumer practice of typing multiple search queries of increasing specificity until a consumer finds the product they are searching for.

We found that an advertiser who appears at least 10% of the time for both the consumer’s initial search query and their follow-up queries received an average lift of nearly 50% of their initial clickthrough rate on the subsequent searches.

If your ad is appearing in the top positions on the SERP, but not that frequently, it can pay to reduce your bid.

By lowering your bid, your ad will drop to a lower position on the page and will receive increased ad coverage, i.e., be shown more frequently, as well as get more clicks. It will also give you more data to optimize your ads. And your campaign ROI will go up while you’re doing it.

Stay on top of competitors’ strategies

Staying on top of competitors’ ad copy throughout the holiday season can have additional benefits beyond generating new copy ideas to test in your campaigns.

Namely, it can also help you uncover your competitors’ strategies throughout the holidays, including:

Knowing this information can help you take counteractive measures to reduce and sometimes even negate your competitors’ holiday strategies.

10 tips Marketers can learn from the Travel Industry

How to make people stay and read your blog posts