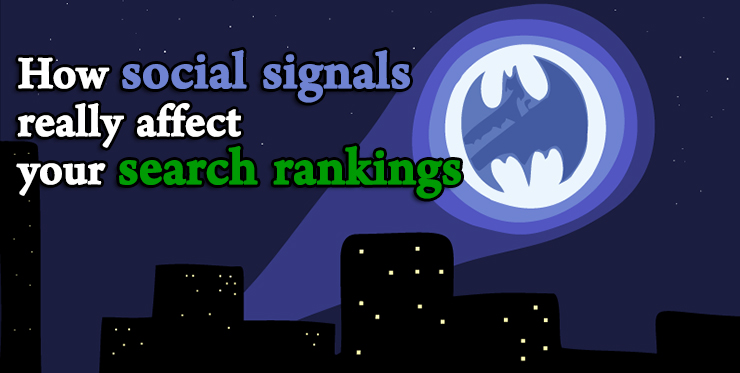 I fear the term ‘social signals’ has been somewhat overused (and in some cases, abused) by search marketers, and there’s a blanket misconception about how they actually affect a site’s organic search rankings.

Personally, I’ve been a long-committed proponent of the use of social media marketing strategies as an element of any SEO campaign, but the influences that social media events have on a website’s actual domain authority are both complicated and poorly understood.

If harnessed properly, engagements and activities on social media really can have an effect on your site’s overall ranking, but maybe not in the exact way you think.

Throughout this article, I want to explain all the ways that social signals can, and can’t, affect your search rankings.

Before I dig into how and why social signals can influence a site’s search rankings, I want to reiterate something that most professional search marketers already know.

As Moz recently stated in their 2015 search ranking factors report, because Google has never disclosed its algorithm to us, it’s impossible to prove that one factor has a direct influence over domain authority or search rankings in general. Instead, we can only use data to come up with correlational reports.

That being said, some features are far more correlated with high-ranking pages than others, which strongly suggests that these features are valuable in producing that higher ranking.

Essentially, the more people who share your article (either by clicking on the share buttons on your page, or by posting a link to your article on social media) the better chance your page will have at ranking. At least from a correlational perspective.

However, consider the fact that having a wider pool of followers will generally lead to a higher number of likes, shares, and comments for your content, which can, in turn, lead to more inbound links to that content.

The caveat to this is of course…

Having 100 followers who engage with you frequently and share your material is far more valuable than having 10,000 followers who never interact with your brand. However, if those 10,000 followers are just as passionate about your brand as the 100 in the comparison, it stands to reason that you’ll see more of your articles shared further, and you’ll earn more visibility and inbound links to your content as a result.

Also keep in mind that there are many secondary benefits to having a thriving social media campaign.

Any links you syndicate to your audience might give you a chance at getting more shares and earning higher rankings but, more importantly, it will drive a percentage of your followers directly to your site, giving you an opportunity for conversion.

If your end goal with SEO is getting more people to your site organically, think of it this way: your social media efforts will likely increase your social visitors in a more significant way than they influence your organic visitors. Ultimately you’ll get more visitors, and that’s always a good thing.

Plus, the more popular your brand is on social media, the more visible it is, and the more easily recognizable it will be for your target demographics.

Some of the effects listed here are semantic. Is there really that much of a difference between a social media engagement ‘directly affecting’ and ‘indirectly correlating with’ your site’s organic search rankings if the end result is the same?

I would argue not really, but it’s important to have a clear understanding of the mechanisms behind those effects, after all, you never know when Google might tweak something and shatter the convenience of that generalized thinking.

In any case, I hope this article has convinced you of the power social media can have on an SEO strategy, and in general as a brand visibility and traffic generation strategy.

For small businesses, it’s fine to ignore the finer points and remember the basic premise that making your users happy on social media is a good thing for your business. It continues to be an important and arguably essential component of any online marketing campaign.

How to remarket your way to a better ROI

10 tips Marketers can learn from the Travel Industry