How to Build your Brand by Awarding the Influencers

HomeMarketingHow to Build your Brand by Awarding the Influencers 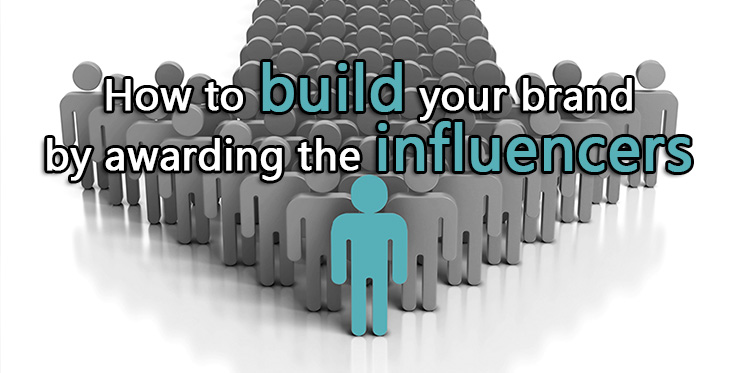 Tapping into the power of influencers to get the word out about your business is one of the most powerful brand-building strategies at your disposal.

Whether you’re a small business or a major Fortune 500 company, brand building is key to growth. Influencers act as a trusted voice speaking to a built-in audience who already trusts them: It’s some of the most effective and organic exposure that any brand can receive.

I know what you are thinking: “That’s all well and good, but how can my brand connect with these influencers? I don’t have a trendy “product” to sell that can easily make an appearance on lifestyle blogs or Instagram.”

Here’s the thing: You don’t need to have a trendy product or service to tap into the power of influencers to build your brand. Sure, if you had a lifestyle brand aimed at fashion-forward 20-somethings, then you’d want to tap into influencer networks like Instabrand, HelloSociety andSpeakr.

But what if your target market is more likely to be found on LinkedIn than Snapchat? How do you identify those influencers and leverage the power of their network connections? Here’s a great solution: Give them an award.

Everyone loves receiving awards. Awards don’t just make our egos feel good; they’re important validation from the community we care about that we’re doing something right. Giving awards to the top influencers in your business community is a great way to connect with these individuals and get the word out about your own business — after all, if you received an award you’d want to talk about it, right?

That’s exactly what happened when Anita Campbell and Ramon Ray of Smallbiztechnology.com founded the Small Business Influencer awards. Their primary reason for doing so was to bring awareness to all the incredible innovators in the small business community.

They started making an informal list of who they felt had the biggest influence in the small-business community, and they wanted to recognize these companies who were making a difference. Even though both Anita and Ramon knew a lot about small business innovators, they also realized that these awards would be a lot more interesting and comprehensive if they opened them up to the community at large to select. And that’s exactly what they did.

Every year since 2011, they’ve held the Small Business Influencer awards for small business vendors, consultants, journalists, media outlets and any person, organization or company that supports small businesses in some influential way.

While Anita and Ramon did not intentionally set out to build their brands through the Small Business Influencer awards, increased awareness for both their businesses has been one of the biggest — and most unexpected — side effects. Both Anita and Ramon are incredibly passionate about small business owners, entrepreneurs and the people who interact with them.

By recognizing small business influencers and innovators, they’re connecting their community and getting the word out about creative products to the people who matter most — and building their brands, too. In effect, they’ve become their own industry influencers. And that’s a pretty powerful position for brand building — no Instagram or Snapchat account required.