Marketing: you’re doing it all wrong

HomeMarketingMarketing: you’re doing it all wrong 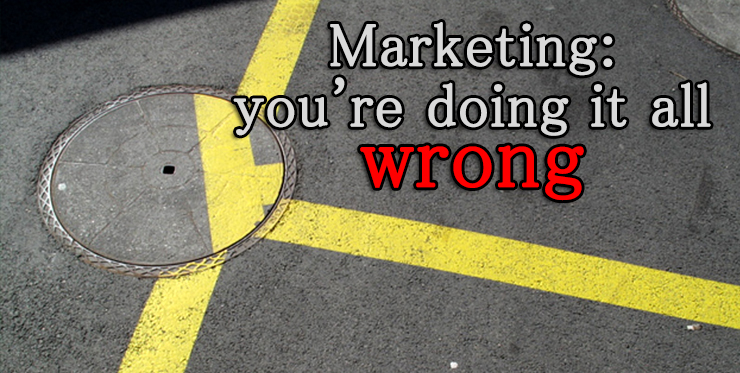 You know that feeling you have when you’re considering a big purchase from a salesperson who’s practically salivating at the prospect for the sale? It’s as though you can actually see this person trying every way possible to get you to buy, and buy big, without any regard to what you want or need.

That’s exactly what you don’t want your customers to feel like, and it’s an important no-no to keep in mind when you’re developing your next marketing pitch.

Certainly, marketing your business can be a massive undertaking, especially when you’re seeking new customers, as well as seeking the best way to connect with, and turn them into, consumers.

It’s here that most businesses just talk about themselves or, worse, try to pressure customers to buy. This is an approach to marketing that doesn’t help those businesses. They ask themselves, “What can this sale do for me?” and “How can I get it” And both are the wrong questions.

Giving as your primary method of marketing is much more efficient and powerful than asking. What you can offer to your customers is much more powerful as a marketing and rapport building tool than what you can ask or gain from them.

The concept of marketing has become so clouded, with the focus being only on the end game (“I want the sale”), that businesses often forget the most important part of the process, which is giving and offering true value to potential customers.

The fallacy of just asking

Just “asking” has the potential to be effective sometimes, but it often alienates potential customers and doesn’t build rapport.

Sometimes, push marketing, or going in quickly for the sale, does work: Seeing that buyers are ready to buy, and have their wallets halfway out can be a good start. This is especially true when the sale doesn’t involve personal information or a great deal of money (think: a car sale or loan application). Sometimes, though, it generates annoyance and frustration from the potential customer.

A great example of push marketing done poorly is those neighborhood kid-run lawn services, where teenagers distribute flyers at the beginning of the summer, then keep showing up every couple of days asking to cut your grass or wash your car, even if you’ve said no 20 times already. You know they’ll miss half your yard, they’ll pull out plants instead of weeds and you’ll find soap residue caked onto your car two days later. In fact, you’re pretty sure about the poor quality you can expect: Those teens just want your money, and they’ll use you to get it.

Now, turn this scenario into one involving professional services people who have your phone number, and you can see how truly exhausting and grating for the customer this style of marketing can become.

The benefits of give marketing

Instead of simply cold-calling or sending out mass advertisements that ask for a sale, I’ve found what I call the “give, give, give, ask” model to be more effective. Asking can and does work — but only after you’ve built a relationship with customers. Otherwise, they feel that you just want to do business with them for their money. And they’re right.

Instead, take the time to actually listen to someone’s needs and show what you can do in response, and the results it will bring about. Chances are, the customer will be much more receptive to working with you or buying in the future.

In a recent interview, Bryan Harris, the founder of VideoFruit, told me that the idea is to “show, don’t tell.” Show prospective customers what you can do for them, Harris suggested; but don’t ask for anything (at least at first). When Harris was building his own business, he said, he found a contact he knew he wanted to work with: Neil Patel of Kissmetrics, whose business created awesome infographics.

Harris then created a video of Kissmetrics’ best infographics, and sent it to Patel, simply saying something along the lines of “I love your content, it’s helped me a lot. So I’ve turned your most popular infographics into a video.”

Harris sent that email without asking anything in return, and immediately got an email back, with Patel saying he wanted to work together — a powerful example of how “giving” to market your business can help quickly build and expand it.

You’ve given the customer time, value and/or resources and asked nothing in return, until you’ve proven your value enough to ask him or her to consider working with you. At that point, the customer believes in you, has a relationship with you and is excited about the work you can do. The customer is also excited to spend his or her money instead of grudgingly purchasing something that may produce later regret.

The process is not unlike asking a woman on a date after meeting at a coffee shop. The answer is more likely to be yes if you offer to buy her coffee, talk for a few minutes and build rapport and connection before the “ask” — compared to a scenario where you just walk up to her in line, interrupt her conversation, tap her on the shoulder and ask for a date. Which would you be more receptive to?

Giving, and then giving more

Giving as a primary marketing focus instead of asking is more effective for obvious reasons (though asking for the sale at the end of it all is still important!).

Faith, rapport and long-standing relationships are built most effectively — and most strongly — through generous listening and thoughtful giving, not through simple luck and success targeting the right person with the right marketing message.

If you listen to your customers’ needs and figure out how to offer them value, and you don’t ask what they can do for you, you’ll likely be a lot more successful in marketing — and expanding — your business.

10 ways you can gain Trust online

4 mobile marketing lessons that big brands can learn from startups