New MarketingNerds Podcast: When is it
worth investing in yourself?

HomeROINew MarketingNerds Podcast: When is it worth investing in yourself? 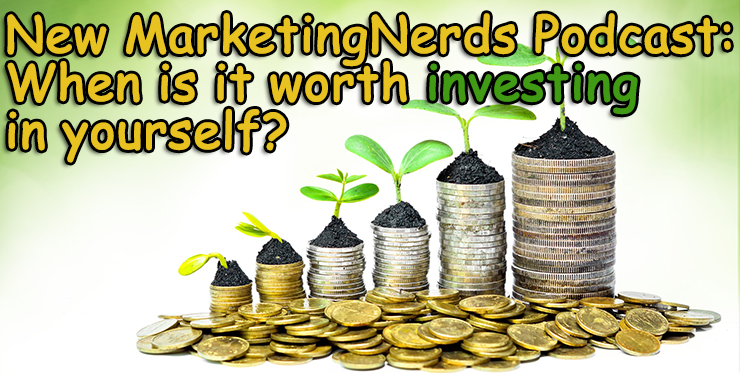 In this week’s episode of Marketing Nerds, SEJ Executive Editor Kelsey Jones and Senior Editor Danielle Antosz talks about when it’s time to invest in yourself, whether that means buying the best technology, upping your wardrobe or hair game, or paying to attend conferences and take classes.

Here are a few of transcribed excerpts from their discussion, but make sure to listen to the Podcast to hear everything:

Investing in Yourself and Making Your Time Better Spent

It’s really hard when you start out if you’re working normal nine to five job and then working weekends and nights for a side hustle. You have to spend the money and it’s really hard to change that mentality from a boot strapping to a more legitimate business.

Conferences are a big one. You can also invest on memberships to local groups where it’s a couple of hundred bucks a year for weekly or monthly networking event and it’s definitely worth it.

It’s hard because you’re going from boot-strapping to really deciding on what’s worth investing in. If you’re spending an extra 15-20 seconds waiting for a file to open because you’re computer is too slow, think about how much time you’re wasting over the course of the day if that was billable. Boot-strapping is no longer the way to go and you need to invest in the equipment to be a true professional.

At the end of the day it all comes down to giving you the most time to do what you want which includes work and then hopefully some fun leisure stuff. Realizing that you owe it to yourself and your business to invest in things that are going to make you better.

When is the Right Time to Outsource?

Because if your heart’s not truly in it the brain space that you’re wasting on ignoring that task and then the length of time it’s going to take you to get it done because you’re dragging your feet.

It’s so easy to get caught up in the, “I don’t want to pay someone to do that.” Those tasks that I drag on those are the ones that I choose to outsource. Someone can do it better, faster and cheaper.

Stepping up Your Game

Neil Patel wrote an article about how he has spent six figures on his wardrobe it actually generated him three times as much profit. It was a huge increase in income. The article was really controversial because people don’t like hearing that clothes make that big of a difference but they do. He just talked about that when he wore designer clothes then the way he felt about himself changed and the way people perceived him changed.

I think stepping up your game in the wardrobe department especially if you usually work from home and then you’re being asked to come into an office or present at a conference will, at least, make you feel a lot more confident and put together. And it’s high quality pieces that you can wear for years to come.

You should check out the thrift stores. You don’t necessarily need to dole out the cash money to get the same effect. If you go to a thrift store or you go to consignment shops to get a better deal in some of the designer pieces that are the black skirts, the pencil skirts for women, the nice suit for men.

It’s not about vanity. It’s about being professional. Putting yourself out there as a professional who’s confident, who knows what they’re doing and who should be trusted with someone else’s money. When you think of it that way it doesn’t seem as frivolous.

To listen to this Marketing Nerds podcast with Danielle Antosz and Kelsey Jones:

How to build up your influence on social media

4 tips for 4 weeks of Holiday Campaigning