Six things you should be measuring on your app

HomeMobile MarketingSix things you should be measuring on your app 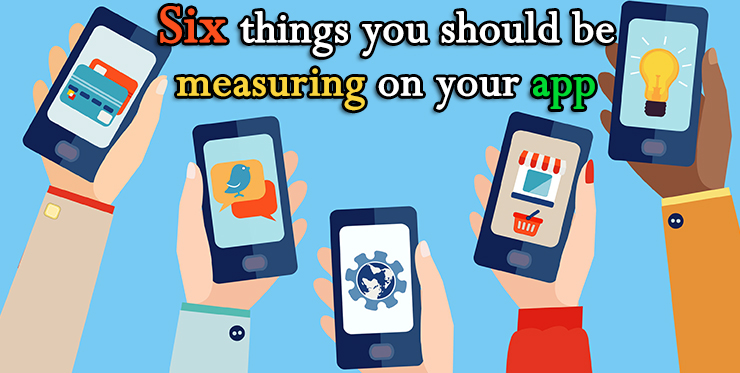 When it comes to your app, what should you be measuring? Here are six places to start.

In other words, apps are important for any mobile marketer. But when it comes to gauging their success, what should you be looking for? Here are six questions you should be asking.

The first thing you should want to know about your user is everything. Sure, demographic data is important for targeting, both of the specific users and similar people who aren’t users. But it’s also helpful to know what device they’re using and where they fall in the conversion funnel.

“It’s very difficult to tailor content and offers if you don’t know if the user is male or female. How do you advertise if you don’t know who your users are?” says Karl Stillner, chief executive (CEO) of PushSpring.

2. How did the user find your app?

One particularly important bit of data about your user: where did he or she come from? The origin of the acquisition, be it an email or an App Install ad on Twitter, can play a part in the overall experience that you serve. Knowing that gives you insight into how your marketing is resonating with people.

It’s also good to know from a conversion standpoint. If you have a hotel app, for example, the point of discovery may differ for users searching for hotels based on price or distance. Knowing who’s who can help determine the experiences they’re given.

When you use a new app for the first time, there’s undoubtedly some kind of welcome screen. How quickly people scroll through it may seem insignificant, but it can be one of your first clues about their intentions.

“The length and flow of a tutorial gives you an idea of how to best communicate the value proposition that is most useful to a new user,” explains Nancy Hua, CEO of Apptimize. “If you have a returning user, you want to show them different stuff because they already know the basics. If someone was invited [to the app] by a friend, you want to show them a different onboarding flow because the whole point probably has something to do with that friend.”

Looking at my own phone, there’s a big difference between Spotify, which I use all the time including right this second, and Key Ring, which I like in theory but have never used. Just because 19 million people have your app doesn’t mean 19 million people actually use it.

“This is historically what everything has hinged off: how many downloads do you have? That’s been heavily influenced by the App Store ranking, but what people are finding is that an obsession with downloads doesn’t result in high-quality customers,” says Stillner, adding that Google and Apple have both tweaked their algorithms to favor app usage.

One important facet of user activity is month-over-month retention. Acquiring a customer is expensive; make sure you’re holding onto them.

In addition to the location of your ads, you should track their sizes and formats. Seeing what kind of ads move your users to click gives you an idea of what your future ads should be like.

“All that stuff should be tracked and optimized because it makes a huge difference for the revenue,” says Hua, adding that ad frequency is another important metric. “That gives you an idea of the balance between ads and user experience. Sometimes ads can enhance the product experience; that’s the difference between what the person wanted, and being intrusive and annoying.”

6. How does app activity translate?

Another crucial metric is where your app fits into the rest of the ecosystem. What offline and desktop sales are attributable to your app?

Or, in the case of many retailers, what offline and desktop sales are attributable to apps besides your own? Nordstrom, for instance, is so active on Pinterest that stores have “As seen on Pinterest” displays.

The growing popularity of showrooming and webrooming demonstrate that marketing doesn’t happen in a vacuum.

How to turn your leads into profitable relationships

Here is how to position your product as a premium brand