When should you start your holiday marketing? 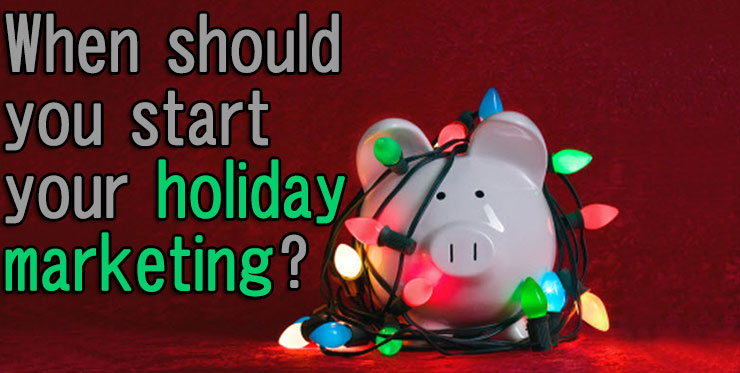 Each year, holiday marketing seems to start earlier and earlier – but is it too early? Use this guide to determine when to start your email, social and search this holiday season.

Many marketers consider the moment that Halloween ends as the unofficial start of the holiday season – but do consumers agree?

A majority of them don’t. Though nearly a third of consumers started their shopping in October, thousands of people have signed petitions on Change.org to boycott retailers like Walmart, Target, and Sears on Thanksgiving and Black Friday.

So when is the right time to start shopping? Just as the Internet is full of articles on the best time to purchase plane tickets (47 days in advance, by the way), there’s also an optimal time to start your holiday marketing.

Here are some numbers exhibiting the best and worst times to push holiday focused campaigns for social media, email, and search marketing.

Every year, social media analytics company Union Metrics analyzes holiday related Twitter activity. The company has noticed that the conversation always tends to spike around the same time of the year.

According to Jenn Deering-Davis, co-founder of Union metrics, the best time to start your holiday social media marketing is about three weeks before Thanksgiving. That’s when the Twitter activity tends to start picking up momentum, increasing in volume each day. Last year there were 6.8 million holiday related Tweets the week of Thanksgiving; 43 percent were on Black Friday.

“We view Twitter as the pulse of the planet, because it’s where people go to talk about everything,” she adds. “We kind of use it as the canary in the coalmine, so we look at Twitter and see the same trends elsewhere. People are already talking about their holiday deals on Instagram and on Facebook too.”

There’s so much noise on social media that posting too early runs the risk of not being seen. Most people aren’t in holiday mode yet during early November, so your marketing may be falling on deaf ears.

“If you go out too early, the audience isn’t ready for it, and it’s just a waste of money,” says Deering-Davis, adding that she saw downtown San Francisco decked out in Christmas decorations on November 4. “If anything, it’s going to irritate people.”

The best time to start: The second week of November – that way, by the week of Black Friday, consumers won’t be seeing your deals for the first time.

Just as with social, holiday search ads shouldn’t go up too early, however they do have a longer planning stage.

Alex Funk, senior director of paid media at iProspect, recommends working on your holiday segments through the fall. This ensures that they’re all aligned and categorized for when people are searching during the peak of holiday shopping insanity.

“There’s Labor Day and back-to-school shopping; once that closes, you’re almost at that point to start putting in motion what the holiday push would be,” says Funk.

When it comes to actually deploying your search ads, it’s better to wait until closer to the actual days of the deals, to avoid ad blindness. In addition, promoting promotions every day can eliminate any sense of urgency for consumers, giving them a blasé “eh, Gap will offer me something else tomorrow anyway” type of response.

“If we’re going to fulfill the demand for those Black Friday and Cyber Monday deals, I think there’s probably a two week window to really capture it: the week of Black Friday through the next one,” says Funk. “That’s the sweet spot. […] You don’t want to be in-market the whole time, because I do think there is such a thing as message burnout and deal fatigue,” he adds. “We make [our marketing] the most impactful by striking when the iron is hot.”

Though it’s still a little early to deploy your holiday search ads, those deals should be reflected on your website to ensure they’re indexed by search engines in time.

The best time to start: Ideally, you should have worked on your segments through the fall so they’re ready by early November. If you haven’t already, update your website during the first two weeks of November to reflect your holiday deals, so that search engines will have had a chance to index them by the week of Thanksgiving. Also, deploy your search ads during the week of Thanksgiving.

Still, you should start thinking about your holiday emails a little earlier than you do social. According to Jeanne Jennings, managing director of digital marketing for Digital Prism Advisors, the key is mixing it up.

Still, you should start thinking about your holiday emails a little earlier than you do social. According to Jeanne Jennings, managing director of digital marketing for Digital Prism Advisors, the key is mixing it up.

“Start with a low percentage of holiday marketing and gradually increase as the date approaches,” advises Jennings, who doesn’t recommend holding off until the week before. “You should have your holiday marketing in full swing in advance of Black Friday and Cyber Monday.”

When you post too early on social, you risk your messages being missed because people aren’t ready to think about the holidays just yet. The opposite is true for email. Last year, YesMail analyzed the previous year’s holiday emails for 30 major brands including Target, Macy’s, Best Buy, and The Home Depot. The research found that of all the emails sent during the last three months of 2013, 38.7 percent were sent in December.

However, as the email volume increased, open rates decreased. Holiday emails sent between October 26 and November 19 had an open rate of 14.7 percent, compared with the 13.9 percent open rate for those sent between November 20 and December 30 (Thanksgiving fell on the 28th that year).

Jennings believes that – maybe not this year, but soon – marketers will send less emails and put more effort into making the ones they do send count. A few examples include automated emails that recommend similar or complementary items to people who have purchased, or more personalized emails.

“I think we’re seeing the start of what will be a larger shift in holiday marketing,” says Jennings. “I’m feeling a bit of a backlash against turning the holiday into a shopping event. REI got it, and they should be given props for its #OptOutside campaign and store closures. But, if you notice, REI’s website will still be open for business on Black Friday – and I bet others will be too.”

The best time to start: You should have started putting holiday emails into the mix last month, steadily ratcheting up the number of holiday messages. Focus heavily on the third and fourth weeks of November. As Thanksgiving draws closer, it becomes harder to stand out within increasingly crowded inboxes.

September: Start building your audiences and segmenting for your search ads.

October: Begin sending a mix of holiday and non-holiday emails.

First week of November: Make holiday-focused emails a bigger part of the percentage.

Second and third weeks of November: Post about your holiday deals on social media. Make sure they’re also reflected on your website, giving you a better chance of ranking on Google. Send your best emails because interest will start waning during the last week of November.

Separating the ‘what’ from the ‘how’ in digital marketing